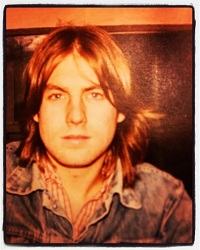 ” dae summkin abooot the soound …its shite man ” not the most obvious sentence to completely and utterly change one man’s life but change it it did….trainee auto engineer Pab then probably eighteen years old had come up to Scotland on a DSB mini tour mainly to make sure the van would get us there and back..and if he didn’t mind ” flicking a few stage lights on and off ” …simple …but life never is…and our poor reluctant soundman Big Dave really wasn’t into doing the sound ” too much fucking hassle ” but had gamely struggled on….and then that Glaswegian shout ..a disgruntled Big Dave’s ” fuck this ” …a quick slide over from lights to sound for Pab ( I genuinely remember the sound tightening up ) compliments all round after the gig and a world class sound engineer was born…he must have always had it in him…it makes you think doesn’t it….the sound of course was central to the DSB experience and had to be heavy and unrelenting and as the band got bigger so did the equipment ..much to Pab’s delight ….big Martin Bass bins…and heavy duty power amps and monitors and good drum mikes ..the whole caboodle …..We would do a gig and leave people thinking ” fucking hell..what was that ” heard a DSB live tape recently and the sound as the Americans might say was awesome..testament to Pabs fledgling skills …..of course DSB split and Pab went back to his day job and thought ” that was good fun ..shame it’s all finished ” but that was no end for Pab ..that was the beginning..and just in case you haven’t heard ask AC/DC or Paul McCartney if they know Pab and they will say ” of course we do..he’s our sound engineer ”
Pab and DSB are back together again working on among other thing DSB’s 40 th anniversary re release of their single ” giving the game away “

Tell Us What You Think ... Cancel reply

This site uses Akismet to reduce spam. Learn how your comment data is processed.