Snoopy , Roxy and Benny … the band dogs … snoopy and roxy used to go everywhere with the band … all the gigs .. up to Scotland all over the place.. 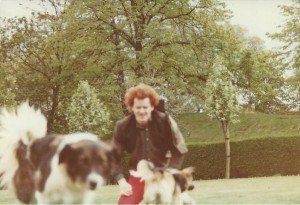 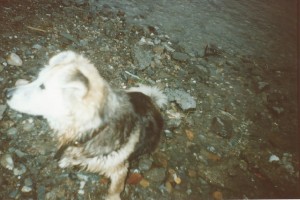 Benny was the house dog .. there were times when starving getting back from a gig at 4AM “someone who shall not be named” would grab the sausages out of his bowl …

It’s 1978 and we need a van !  .. we’re sick of using transits .. breaking down at 2am in the middle of  ?? …. we got together with a crazy hippie ” Mad Dave ” who had found and old ambulance , Pab vetted the engine , in fact he rebuilt it … this is before he got into sound … some of the letters had come off the back of the ambulance leaving  “bula” , Alan the driver at the time “peo” .. he hated that name .. suggested getting airplane seats in the back and Steve drums talked about putting in a partition to keep  the gear from coming forward and killing us all.

Traveling up to Scotland on boxing day maybe 1980 we went into a skid and everything changed to slow motion as we spun around and around until we flipped on to the side and ground to a halt in the outside lane of the M6 just south of Lancaster.. Luckily there was no one else around and … what a fantastic idea to put a partition in .. probably saved a few skulls and other bits from being crushed by martin bins and mid range PA speakers that needed a minimum of two people to carry … I remember Pab saying don’t panic but I can smell petrol !  we all got out ….. fast …  no one was hurt.

Bula lay at Lancaster services until we could get up there to collect the gear , that was the end of that .. it was scrapped

The Police didn’t think much of  “Bula” .. we were stopped and the “sarg” would say I’ll rip the thing to pieces and “I will  find something” ….. he didn’t like us or bula

I used to “believe” in  great hair .. never did anything to it .. just let it be … hair was a big thing back then … when John Lennon shaved his head in 1971 I thought fuck …. whats he done !!!   we did a gig in Scotland and again someone who could make us famous was coming to size us up so we had to big it up … someone decided to give me a haircut and ended up looking like King Charles The 3rd  from the Dick Smith Show Band …. this was Steve (bass) description …

We always seemed to fall for this crap playing mad gigs for someone who didn’t come .. was pissed or just an idiot … we always thought – maybe

Dave used to wear multiple layers of clothes .. shirts and jackets ..  on stage and take them off one by one as the gig went on .. good idea really but not for the 1980’s . Someone made him a fire eater costume that was supposed to look a bit like the single cover .. Dave … I am sure …  will add his reaction to this later …

It was 1981 and people wanted us to look like a 80’s new wave band. We did a gig for the manager of Def Leopard .. he suggested we dress in leather .. for a better image …

The once famous New Brighton Baths had a restuarant attached round the back by the river … called the Riverside Restaurant … one way or another we ended up putting gigs at the Riverside  .. at its peak we used to get from 400 to 500 people jammed in  … it was a fantastic atmosphere and great gig … we used to build a stage out of tables tying them all together from underneath .. took all day to set up … some photos … I think …

We needed a new venue … tried the floral pavilion … didn’t work … so we arranged for merseyside buses to ferry poeple over to the hamilton in Birkenhead … that worked for a while … mad really aranging buses for fans … that was the band .. did not want to give in … we wanted our own gig …

Picture the scene .. It’s 1979 – 1980 on the Liverpool gig circuit, The Dick Smith Band are regular players at the Masonic, Oscars and The Moonstone, they have just released their second indie single Givin The Game Away and Way of The World.

DSB playing at the “Masonic” every Thursday, in the audience are the members of the future Frankie goes to Hollywood. Great days, great gigs and great fun.

Wind forward to 1983, Dick Smith have split up and “The Tube” every Friday night is a must on Channel 4 – we are suddenly presented with a new Liverpool Band called Frankie Goes to Hollywood playing a demo track called Relax, I dropped my bottle of cider and looked aghast when I heard this track, I turn to Dave and Steve and say that sounds like the Guitar and bass from Way of the World, What the ! We couldn’t believe it ..

We never saw this version again and the track Relax was treated with the incredible talent of Trevor Horn and became what it became.

A few years later about 1986 i was at a party in Liverpool with a friend of mine  who recognised the bass player or drummer from Frankie Goes To Hollywood, I couldn’t resist , did you see the Dick Smith Band at the Masonic ? Yes, did you use part of our single Way of the World for the original Relax ? Yes … Well …… I had another Jack D and pondered…

Twenty five years later and here we are in a new century with a strange thing called “You Tube” and the music world turned up side down, and what do we find but the original video from The Tube on You Tube !

So over to you – have a listen tell us what you think, here are the tracks